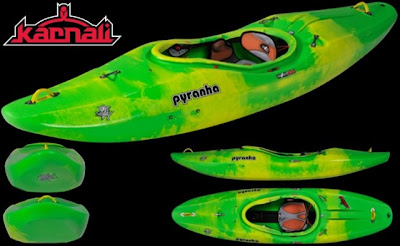 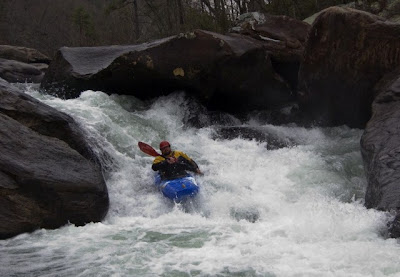 When reading a review of a boat or other gear, I think it is as important to know some background on the reviewer as it is to know their physical stats or anything else. Though knowing a little of their background you can read their review in context, and take their opinion for what it is.

I started kayaking in 2001 and creeking in 2003. Having entered the sport after the introduction of edges and flatter hulls, the majority of the boats that I have owned have had simi-planing hulls, including most of the creekers. The boats that have spent the most time as my primary creeker since 2003 are… H2 255, H3 255, L-Burn, Everest (in that order). I have owned lots of other boats and tried out many more, but those are the ones that I liked enough to stick with them for longer periods of time. Perhaps it is because of my introduction to planing hulls early in my paddling progression or perhaps it is just my paddling style, but I have almost always preferred boats with an edge I can use for ferrying, staying on line, and snapping into and out of eddies. 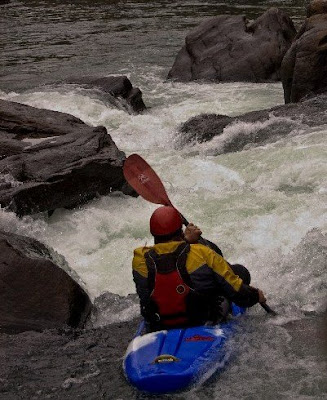 Having a well developed bias towards boats with a harder edge and against softer edge designs, I was fairly skeptical of how the Karnali would jive with my preferences. After all, it has the softest chines of any boat Pyranha has designed in years. However, I do love to try out different boats and try to understand their design and performance differences. Also, a lot of folks had been asking my opinion of the Karnali so when I got one just after the New Year, I was committed to spending some quality time in it to be able to evaluate it accurately and develop an informed opinion. 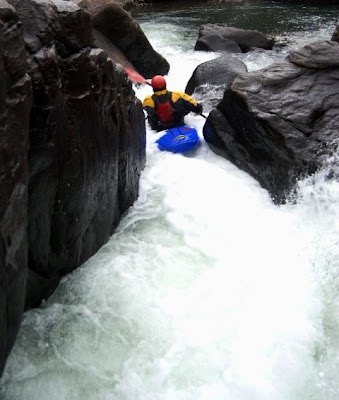 At the time of this writing I have spent 16 days in the Large Karnali on a variety of runs ranging from steep, low volume creeks to higher volume rivers. The majority of my testing has been on Alabama’s Little River Canyon at levels from 200 CFS to 1200 CFS. For those of you not familiar with Little River Canyon, it is the premier class IV-V run in Alabama and its character varies greatly depending on the water level. At lower levels it is a super technical creek run while at higher levels the rapids become pushy and can develop stomping-big holes. Over the past two months a wide range of water levels have provided a great opportunity to test the Karnali out in a variety of situations. 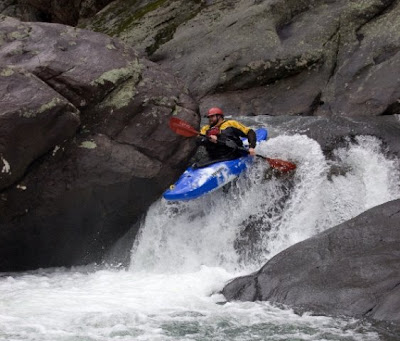 One of the first things I noticed about the Karnali was it’s quick acceleration and great hull speed. Even though I am on the higher end of it’s weight range, with a few quick strokes I can be up to charging speed, and a fast charge it is. Despite being shorter and lower volume, I dare to say the Large Karnali is faster than my Everest. This is probably due to the fact that it seems to have less bow rocker than the Everest. 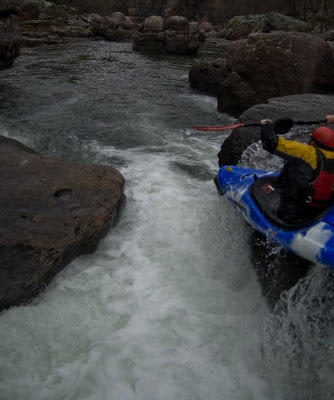 The Karnali also offers good primary stability and impressive secondary stability. Since the edge isn’t totally rounded out, the edge that remains is raised, with a transitional hull area below the edge and then it transitions again to the very bottom of the hull. On the bottom of the hull the designers maintained the simi-planing characteristics that were such a great success in the Burn and Everest. However, the simi-planing area on the bottom of the hull is narrower in relationship to the rest of the hull than it was on the Burn or Everest. The narrower planing surface and the way the chine transitions to the bottom create more of a “V” shape to the bow half of the hull. The result is a creeker/river runner that mows down small waves and holes alike a raceboat. The Karnali is surprisingly quick and nimble; zipping around and dipping in and out of river features with ease. 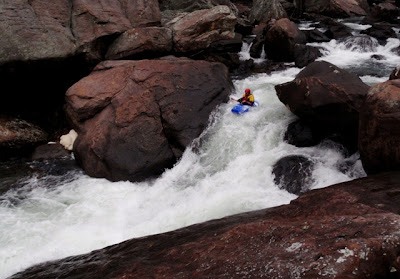 Pyranha has also made the Karnali very forgiving in a number of specific ways. The most obvious, of course, being the soft chines. For those who haven’t mastered edge control or for those who just prefer less of an edge, this soft chine design removes any sense of trippyness those paddlers may have felt in a Burn or Everest. Secondly, while the Burn and Everest are easy to roll, rolling the Karnali can only be described as effortless. I’m not sure how they made it even easier because it’s width is only a hair narrower, but however they did it, it is even easier. In addition, it doesn’t require as much aggressive driving as the Burn or Everest. You can be aggressive and drive it if you want, but it’s design also allows you to relax and be more of a floater when you wan to. In other words, it is much more forgiving when you let your guard down. 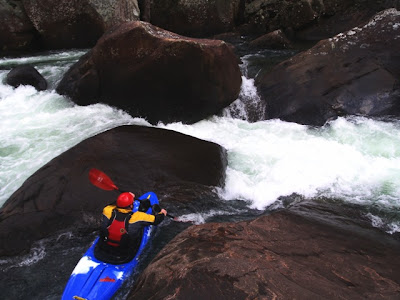 For paddlers who really like a hard edge on their boats, they may find this softened edge ‘too soft’ for their preferences. Luckily Pyranha already has great boats, the Burn and Everest, designed for those paddler’s preferences. Secondly, at my weight (260 lbs), this wouldn’t be an ideal boat for me to do multi-day, self-supported kayaking. There is plenty of space in the boat, but my weight, plus days worth of gear, food etc... I feel like I would probably be overloading it and by doing so, I would be sacrificing performance. I would love to see an XL Karnali sometime in the future. 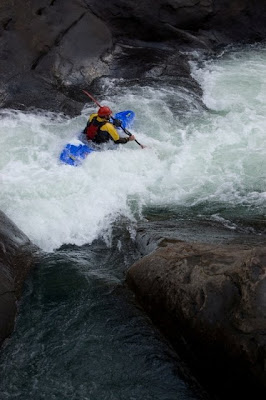 Conclusions:
The Karnali really complements and helps complete the rest of the Pyranha line-up. Maybe Pyranha should consider changing their tag line from “By Enthusiast, For Enthusiast” to “Something For Everyone”, because they continue to listen to and design boats for every person and preference imaginable.

In the latest of their ever evolving designs, Pyranha has managed to maintain many of the best features of the successful Burn/Everest lineage, but redesigned for paddlers who want a soft, forgiving edge. The Karnali is stable, fast, and nimble; resurfaces predictably and rolls incredibly easily. It’s softer chine makes for a boat that will suit everyone from beginners to Class V junkies. Anyone who is looking for the forgivingness of a displacement hull and appreciates the advantages of a simi-planing hull will undoubtedly find the Karnali a joy to paddle. 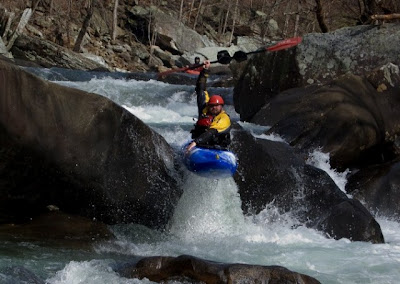 Posted by granolapaddler at 2:55 PM

Did you find it more difficult to maintain your line? I have recently tried a karnali and I foudn that I had to use many more correction strokes than my deisel or mamba. - Perhaps I'm just used to more edge...